after 15 years, it's very touching 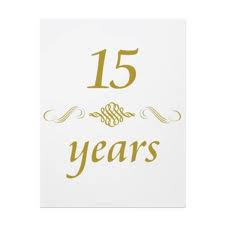 So today is my anniversary. It's my 15th year anniversary of having been with a man, one and only, my SRK. It's been 15 years and it feels like forever and ever. The person I am today, you, I can't imagine myself in a situation where a man be interested to marry me.

I went to Pulau Perhentian with my collegues for vacation and the instant we got there, I saw this guy I liked and who totally my type, I guess huhu. Then, later he ended up right near me and he said, "Have a nice vacation but please do not walk alone at night". I said, "I know, bro."

I ended talking to him. He said he wanted to go back on the 2nd day and decided to exchange numbers. My friend gave him my number but since the speed boat already waiting, so I just said nothing except my nickname.

Well, only after 2 weeks later he called me, asking for outing with him. It's just a simple meeting and we promised to meet at KFC (where else to go in New Castle, you...) but unfortunately I didn't know what's in his mind. Until few hours, tak nampak batang hidung dia. At the end, it was too bored and weird, and nothing has happened.

I guess I should look further on the positive side of thinking. I don't expect for anything. He didn't come to meet me at KFC because he was waiting at McDonald. Akak salah dengar atau dia yang kurang ambil perhatian. It's ok, small matter.

Sometimes I just want to live happily, come home from work with a great face, being  the best mom to my daughters, being a perfect wife to my husband who will love me forever.

Email ThisBlogThis!Share to TwitterShare to FacebookShare to Pinterest
Labels: wish